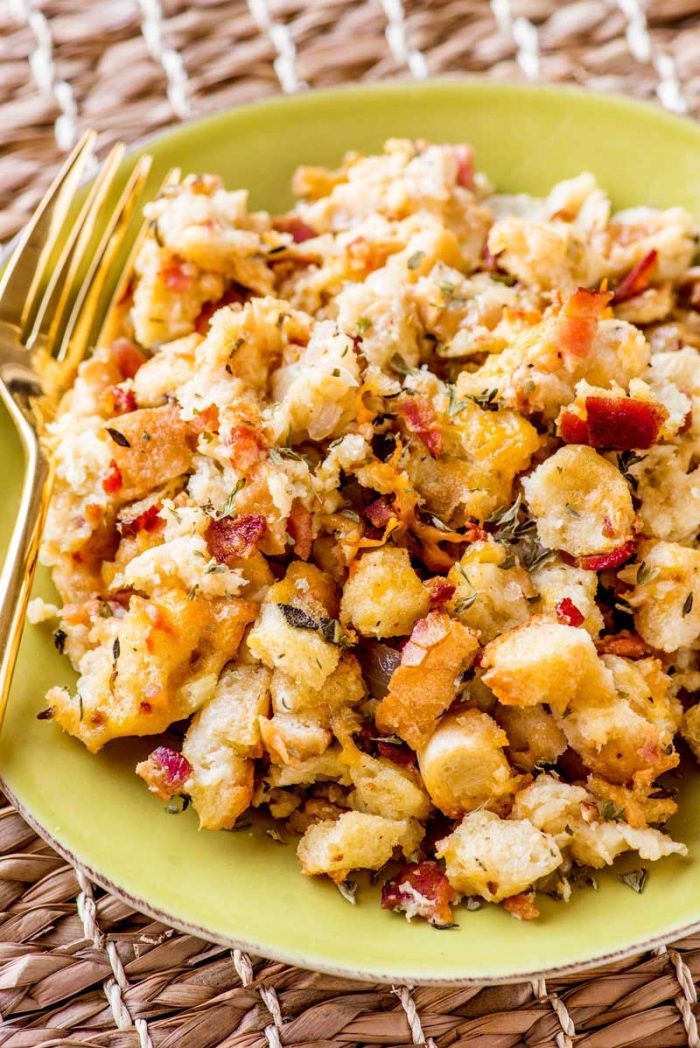 In order to make your own casserole dish full of this bacon cheesy goodness, you’ll need the following ingredients:

Is there a difference between stuffing and dressing?

If you want to get technical, “stuffing” is supposed to refer to whatever is actually stuffed inside the main dish (such as stuffing the cavity of turkey or chicken). And by classic standards, a bread-based side that’s baked in a dish is usually called “dressing.”

So, what should you call a dish like this, then?

In the end, you can call it whatever makes the most sense to you. Neither is wrong and everyone will know what you mean. And this is exactly what I do when I cook stuffing for company: we all use our favorite word, multiple times a day, as if there’s a competition going on (there is) and whoever says their word the most wins (I will totally win).

Can you use precooked bacon?

The bacon in this Thanksgiving stuffing recipe is cooked within the dish, so it will heat and crisp up with the rest of the ingredients while in the oven.

However, if you’re concerned at all about the texture of the bacon, you could nuke it in the microwave (or even pan fry it for a few minutes) to take some of the moisture out and get it to a crispiness that you like.

How should you prepare the bread?

One of the keys to making delicious stuffing is a simple trick:

Cut the bread into bite-size pieces, then leave it out, uncovered, overnight.

This will allow the bread to dry out some, which is very important for the texture and flavor of the stuffing. Even using slightly stale bread is okay. It gives the bread some crunch (but not too much) and encourages the bread to absorb flavors without becoming too mushy.

Can you make herb stuffing in advance?

Stuffing is typically made for big holiday dinners, and one of the keys to success is timing. With limited counter space and oven room, the more you can make in advance, the better.

The bad news here is that stuffing is still best baked just before serving. But fear not! You can prepare most of the recipe steps in advance so that when you’re ready to eat, all you need to do is mix and bake. Such as:

How long is stuffing good for?

Once prepared and cooled, this bacon cheese stuffing can be stored in a sealed container in the refrigerator for up to five days.

Can you freeze stuffing?

Once prepared and cooled to room temperature, herb stuffing can be stored in a sealed container or freezer bag for one to three months.

notes & tips for this bacon stuffing

Step 1 – Before you get started, make sure you’ve dried out your bread (see point above) and that you’ve cooked or crumbled your bacon (or you’re using precooked bacon).

Step 2 – Toss the butter in a skillet and allow it to melt. Add the celery, onions, and season with salt and pepper to taste. Cook the veggies until tender.

Step 3 – Pour beer into the skillet and bring it back up to a simmer. Allow everything to cook until the liquid has reduced by half and it turns an opaque golden color. Remove the skillet from heat.

Step 4 – In a small bowl, whisk together the egg, Worcestershire sauce, and chicken broth. Set this bowl aside as well.

Step 5 – In a very large bowl (I like using a 13-quart mixing bowl), add the french bread, 1/2 of the bacon, 1/2 of the cheddar cheese, 1/2 of the thyme, and the sage. Pour in the cooked veggies, as well as the chicken broth mixture, then gently toss the mixture to coat the bread.

Step 6 – Spray a 9×13 baking dish with cooking spray, then pour the stuffing mixture in, spreading it out into an even layer. Finish up by sprinkling the remaining bacon, cheese, and thyme on top.

Step 7 – Cover with aluminum foil and bake. Remove the foil halfway through. 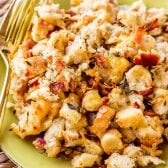 * To dry out bread: The easiest way is to cut the bread into 1-inch cubes and leave it out, uncovered, overnight; the bread will be dry and crunchy by morning. If you need to dry bread fast, you can cut it into 1-inch cubes and bake on a baking sheet at 400 degrees F for 20-25 minutes, stirring halfway through. Bread should be crisp and slightly golden but not overly browned.