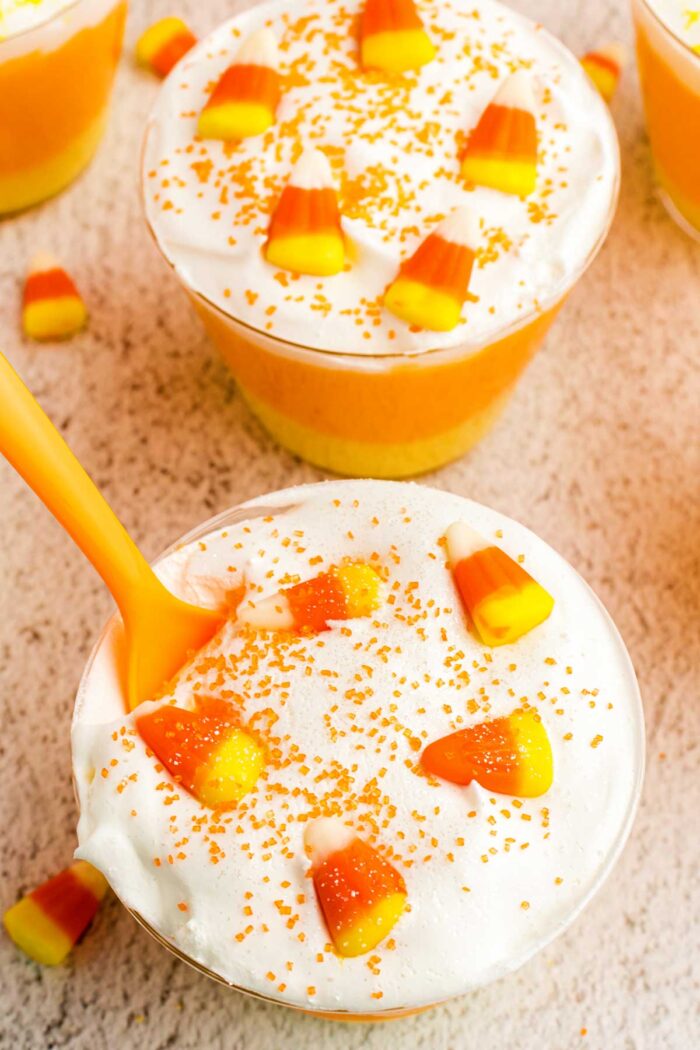 Everyone has an opinion about candy corn, but there’s one thing you can’t deny: it’s an iconic fall candy that has built-in Halloween vibes thanks to the orange and yellow hue.

Plus, candy corn is just bright and colorful fun.

And that’s exactly what these candy corn pudding cups are, too, except for this type of fun you can eat it with a spoon!

What’s in these pudding cups?

Before you can enjoy these festive Halloween pudding cups, you’ll need to round up the following ingredients:

Do you have to use Cool Whip?

In theory, no – there’s nothing “special” about Cool Whip that would make these pudding cups better (or worse) if you were to use an alternative ingredient, such as homemade whipped cream. Cool Whip does bring additional sweetness and flavor, but most whipped cream is sweetened to a similar amount.

Please note I have not tested this recipe with whipped cream; I’ve only ever used Cool Whip.

Can you substitute the whole milk?

Technically, yes, you can use milk alternatives (such as fat-free, 1%, lactose-free, etc) but be aware that this may mean a softer set for the pudding. Be sure to check the box of your instant pudding mix for any additional warnings, restrictions, or instructions.

Can you make these in advance?

Certainly! The only change I would recommend is holding off on adding the Cool Whip, candy corn, and sprinkles until just before serving.

For the best presentation, I recommend preparing the base part of the cups (which would be making the vanilla pudding, adding food coloring, and layering in the cups) no more than 24 hours in advance.

How long are pudding cups good for?

Once prepared, candy corn pudding cups can be stored in the refrigerator for up to five to seven days.

Can you freeze these pudding cups?

Once prepared and cooled, these pudding cups can be wrapped individually with plastic wrap or aluminum foil and stored in the freezer for up to three months.

TIP: if you insert a popsicle stick into the middle of the cups before freezing, you could create candy corn pudding pops! This is totally optional, of course, but it’s a fun way to make the leftover pudding cups feel like a new treat.

Step 1 – Get started by using the instant vanilla pudding mix and the whole milk to prepare the pudding per the package instructions on the box.

Step 2 – Once the pudding is prepared, divide it into two bowls: one bowl should have two cups worth of pudding while the other should have the remaining four cups.

Step 4 – Assemble the pudding cups by creating layers of the following in clear plastic cups: four spoonfuls of “yellow” pudding, followed by eight spoonfuls of orange pudding, topped with a dollop of Cool Whip, then decorated with candy corn and sanding sugar.

Step 5 – If you’d like the pudding cups to be chilled, set them in the refrigerator for one hour. 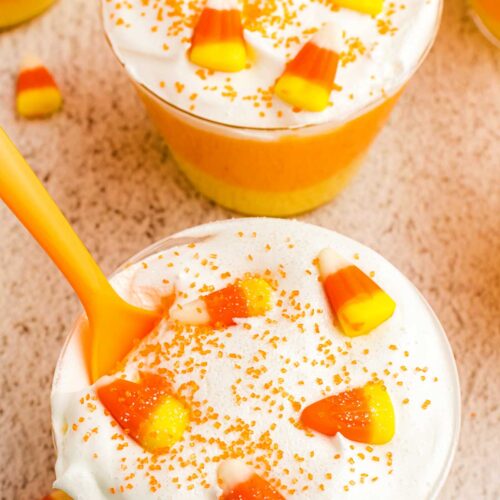