This winter cocktail tastes like a festive version of a piña colada! Blue Curacao and shredded coconut help give this tasty drink it’s blue, wintry flair. 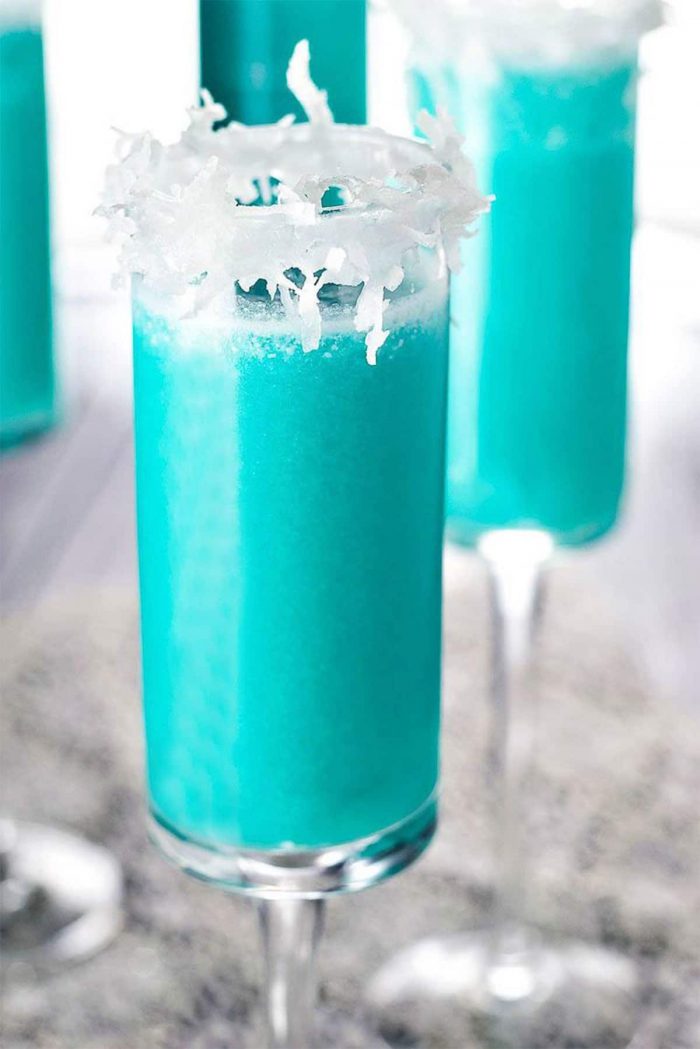 If you’re longing for summer in the midst of winter, there’s one delicious way to cure those blues away:

It’s like a festive version of a classic piña colada, only with a festive blue color and tasty shredded coconut along the rim.

Cream of coconut vs coconut milk

This recipe calls for cream of coconut, and it’s important to note that this is not the same thing as coconut milk or coconut cream. All three ingredients come from a similar base, but there are key differences in consistency and how they’re used.

Overall, coconut milk is liquid like cow’s milk, and is made from simmering one part shredded coconut and one part water. It’s very commonly used in Thai recipes.

Coconut cream is unsweetened and has a very thick consistency. Like coconut milk, it’s made from simmering shredded coconut and water, but the ratio has far less liquid, using four parts coconut to one part water.

Because of the significant differences in consistency and taste, I do not recommend trying to substitute coconut milk or coconut cream for cream of coconut. Make sure you’ve found true cream of coconut before making this recipe.

Where can I find cream of coconut?

If you’re having trouble locating cream of coconut at your local grocery store, check these areas first:

How to measure this drink

This cocktail is written like a standard drink recipe, meaning that instead of an exact measurement (ex: 1 cup) the recipe will read “1 part.”

This can sometimes be a little confusing, but I’ve found the best way to think of it like this: Recipes that measure in parts usually mean it’s written so that you can adjust the size of the drink to whatever you want and the measurements they give you (1 part, 1/2 part, etc) are so you can keep the ratio of the ingredients correct.

This way the drink will taste the same no matter what size you make it.

What were the old measurements of this recipe?

As time goes on, I may update recipes depending on experience, format, or reader feedback to help keep things consistent and clear. This winter cocktail was one of those recipes, which was updated in 2020 to keep the measurements uniform with other drinks on this site. But originally, there were exact measurements included in the instructions for making four drinks.

If you’d like to get right to it, below is the recipe as it was originally written.

To make 4 drinks, add these to a blender:

How to make a winter cocktail

Step 1 – If you’re decorating the glasses, add some light corn syrup to a plate. Dip a glass upside down to coat the rim. Add some shredded coconut to another plate, then dip the coated glass in the coconut, so the coconut sticks to the rim. Set the prepared glasses aside.

Step 2 – Add the ice, pineapple juice, vodka, blue curacao, and cream of coconut to your favorite blender, then pulse it until smooth.

Step 3 – Pour into the decorated glasses and enjoy!

For the Winter Cocktail