A creative spin on Halloween brownies: brownies baked in the shape of a cauldron and filled with green cheesecake filling, M&M’s, and green caramel syrup. 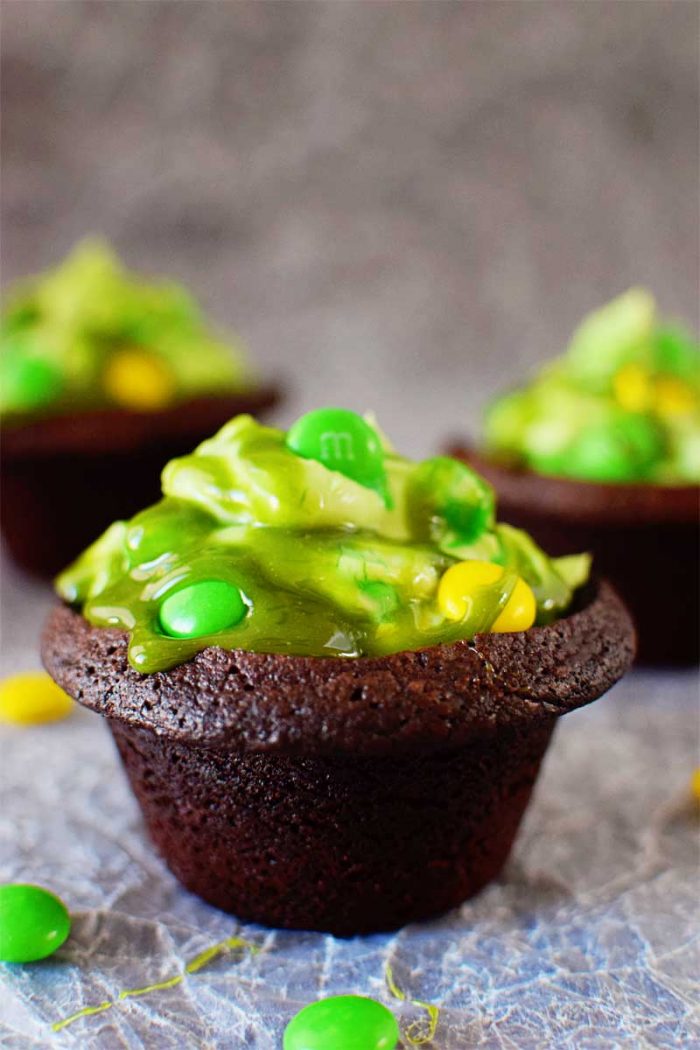 I know, I know, I’m cutting it pretty close to Halloween, but I just had to get one more recipe out of my system before the season ended. I’m having way too much fun with this stuff!

Witches are really “in” this year, and I’m not complaining – I’ve watched Hocus Pocus and The Craft more times than I can count over the past few weeks. The internet also seems to agree with the awesomeness of witches, as my most popular post over the past few days (by a landslide) has been Witch Finger Pretzels. And I gotta say, it’s nice to see we’re finally mixing things up after the past few years of zombie and vampire craziness.

Nothing against zombies or vampires, of course, but my heart will always belong to the witches. It’s been that way since my first Halloween costume in 1986.

So in the spirit of witches, I decided I would test my hand at making dessert cauldrons. I’ve seen plenty of cute cauldron recipes floating around, but I gotta be honest: most of them look way too complicated for me to even hope to make myself. I’m just not that talented of a chef (yet!) so when I started this quest for cauldrons, the primary goal was to make sure they’d be easy to make. 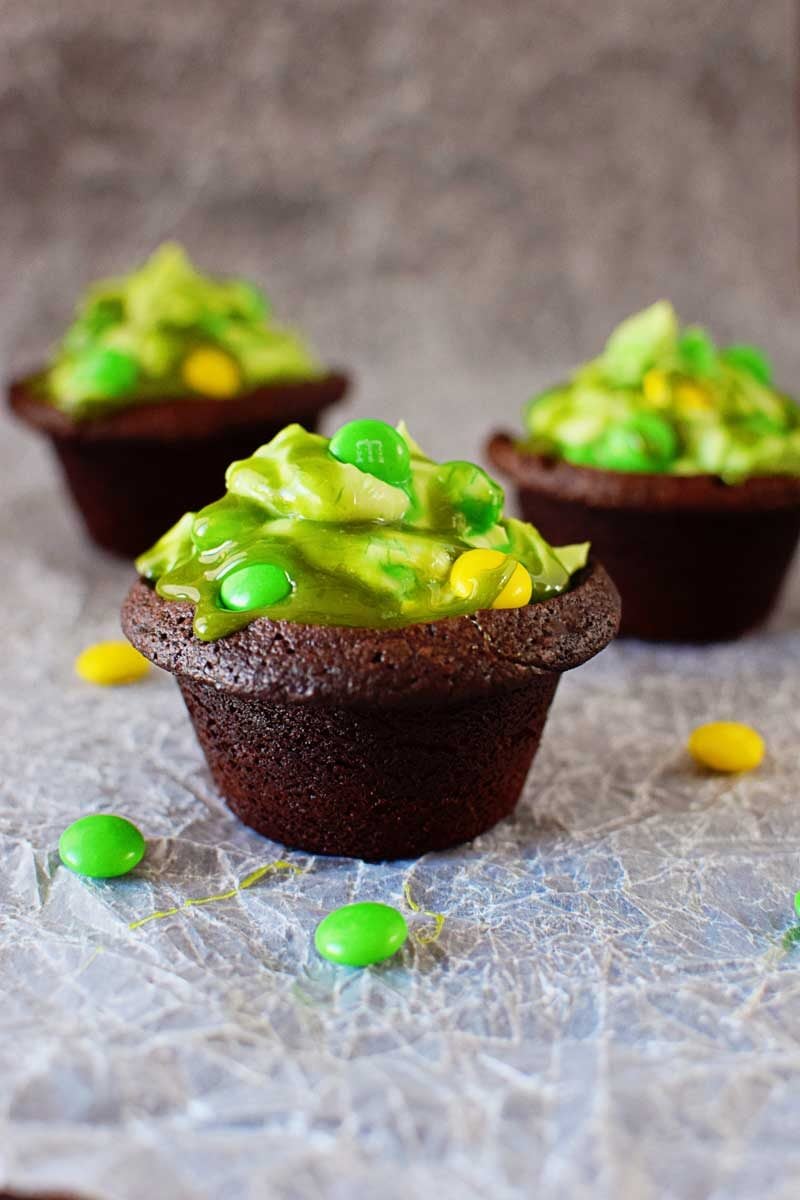 And I’ll tell you what, I’m pretty proud with how these little guys turned out.

I combined some of my favorite flavors and methods that I’ve learned over the past few months for this recipe, and doing that fulfilled one of the goals I made when I first started this blog.

It’s what I’ve grown to love about cooking – the possibilities are endless and the only question you have to answer is, “Does it taste good?” 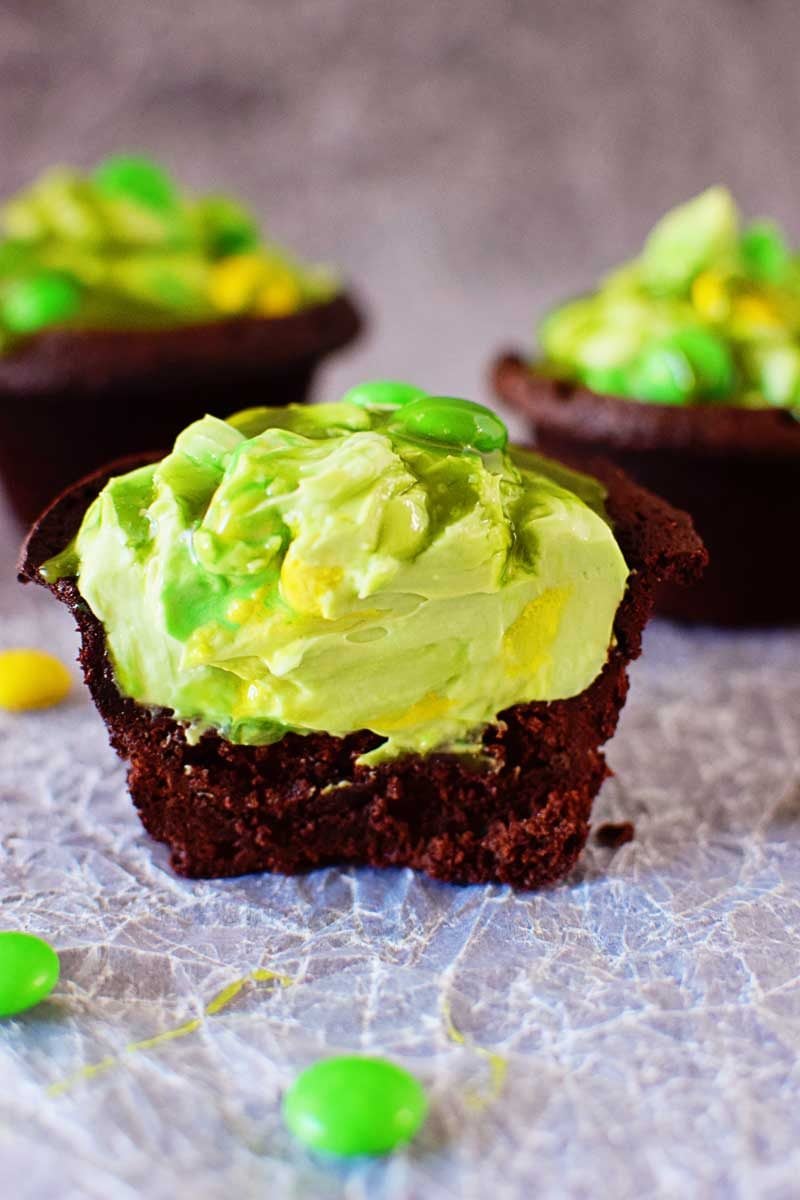 I tried a few different methods for creating the cauldron “cups” – like mixing cookie crumbles with butter or straight up melted chocolate.

If I had a cauldron candy mold those options might have worked out better, but all I had to work with were my trusty muffin tins. So going with that, I found that using brownie mix ended up being the best method by far.

The chewiness of the brownies helped make the cups more sturdy. It also gave me a good excuse to make the ultimate brownie recipe again. Not a bad thing!

Dryers ice cream has a simple tutorial (with pictures!) that I used for making the cauldron cups with the muffin tins. I explain it all below, but the pictures help. I tried taking my own and couldn’t get the lighting to cooperate with the dark color of the tins.

In order to keep with the witchy theme, I also had to get my hands on some green caramel sauce. I debated making my own from scratch, but, in the end, I just added some green food coloring to some store bought caramel sauce. Worked just as well!

And finally, I did buy a few bags of M&M’s just so I could pick out all the green ones. I’m sure many of us still have a hidden talent for hunting down green M&M’s. I’m totally guilty of it, too.

I also picked out a few yellow M&M’s, just to add a bit more color.

If you like the Candy Corn M&M’s, these cauldrons would look awesome with a few of the white ones mixed in.

You can go crazy and add sprinkles or other pretty things, but just be warned – these cauldrons are already very rich in taste from just what’s in the written recipe. 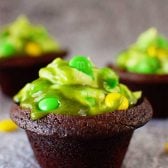 Putting it all Together