Great for any holiday dinner, this tender bone-in ham is coated in a delicious praline glaze made of butter, brown sugar, maple syrup, and chopped pecans. 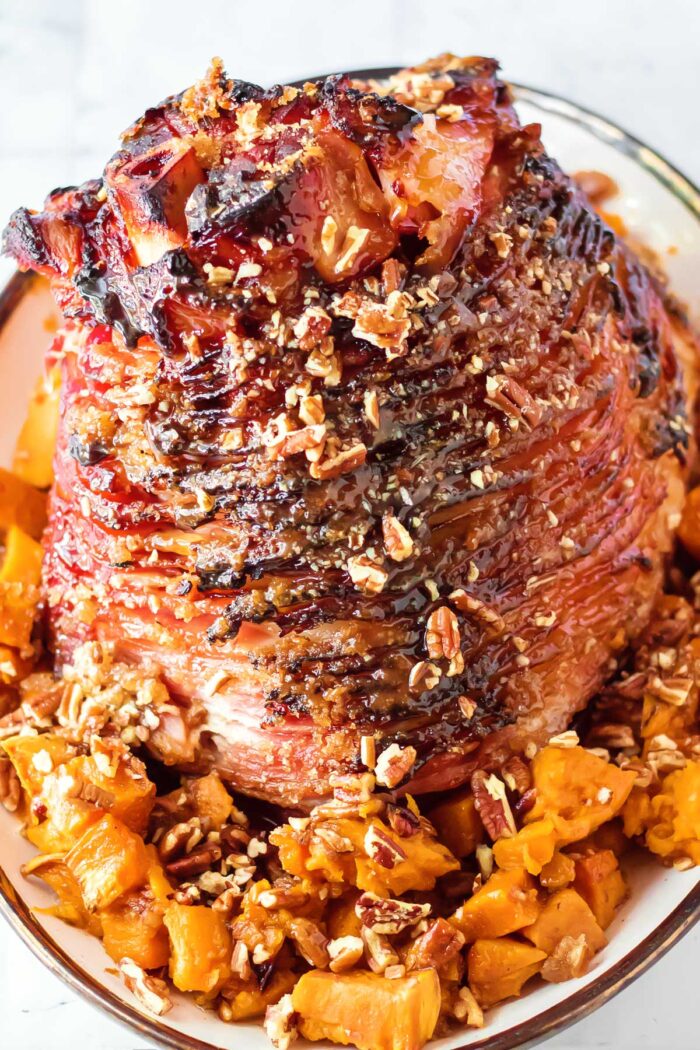 Enjoy a southern tradition this holiday season by baking a classic spiral-cut bone-in ham with a sweetly delicious praline glaze.

What is praline glaze?

Popular in the southern United States, praline glaze is a simple mix of brown sugar, butter, syrup, and crushed pecans. It gets its inspiration from baked goods like praline cookies, which is another southern classic that combines many of the same ingredients for a sweet, crunchy flavor.

To whip up this southern-style glazed ham, you’ll need the following ingredients:

Although sometimes used interchangeably, there are quite a few differences between sweet potatoes and true yams that can impact your cooking. And notice I said “true yams”, as many American grocery stores add to the confusion by labeling some sweet potatoes “yams” despite the fact that true yams are nothing like sweet potatoes at all.

Confused? You and me both!

In short, this is the Cliff Notes version of what’s going on with these potatoes and how to tell them apart:

There are other differences (nutritional value, various names, etc) but the above three points are the ones you need to consider when making substitutions in your cooking.

Given the above, many of the vibrant and sweet-flavored sweet potato dishes you know and love will require just that: a sweet potato (or a vegetable that looks like a sweet potato but has been labeled a yam). A true yam would not have the same bold presentation or flavor that compliments ingredients like brown sugar or maple syrup.

So, in conclusion: always use a sweet potato (or vegetable that looks like a sweet potato but was labeled a yam) when you can, especially if it’s a sweeter dish with ingredients like brown sugar, maple syrup, vanilla, etc (like this praline baked ham).

What type of ham should you use?

When it comes to picking a ham, you’ll want to purchase a spiral-cut pre-cooked ham. You can also purchase a pre-cooked ham that hasn’t already been cut, but you will need to score the top of the ham before baking so that the glaze can still penetrate the meat. From there, you’ll typically find there are two options:

If you’d like to read more about different cuts of hams and the differences in preparing them, check out this Better Homes and Gardens article.

How much ham per person?

When planning your dinner, use these measurements as a general guide for how much ham you’ll need:

How long is glazed ham good for?

Once prepared, ham leftovers should last anywhere from three to five days in a sealed container in the refrigerator.

Can you freeze this ham?

To freeze, store the ham in an airtight container or freezer bag. Once frozen, glazed ham will remain good for up to one to two months. If possible, save any juices from baking the ham; these will help add moisture when it comes time to reheat the ham.

How to reheat ham

If still frozen, allow the ham thaw in the refrigerator for one to two days. NOTE: Never thaw a ham on the counter; the outer layer of the ham will be at room temperature for too long, posing a food safety risk.

Once thawed, place the ham in a roasting pan and loosely cover it with aluminum foil. NOTE: If you saved the original juices from cooking, you can remove the roasting pan’s grate, place the ham directly inside the pan, and add the juices around the ham.

Reheat the ham at 325 degrees F for 15 minutes per every one pound of ham.

What to serve with glazed ham

How to make praline glazed ham

Step 1 – Kick things off by removing the ham from the packaging and discarding any liquid, flavor packets, or baking bags. Set the ham in a roasting pan and surround it with cubed sweet potatoes.

Step 2 – Microwave some of the butter until melted, then add some of the maple syrup to the bowl. Mix it well, then drizzle it over the ham and the sweet potatoes.

Step 4 – When there are 30 minutes left on the cooking timer, remove the ham from the oven. Mix together the brown sugar and chopped pecans, then cover the ham and sweet potatoes in the mixture.

Step 6 – Just before the ham is done, prepare the final glaze by cooking the remaining butter and maple syrup in a saucepan until hot and bubbly.

Step 7 – Once the ham is done, pour the maple-butter glaze over everything in an even layer.