Enjoy a classic white Russian cocktail with a fall twist by infusing its creamy coffee flavor with a mix of pumpkin puree, maple syrup, and pumpkin pie spice. 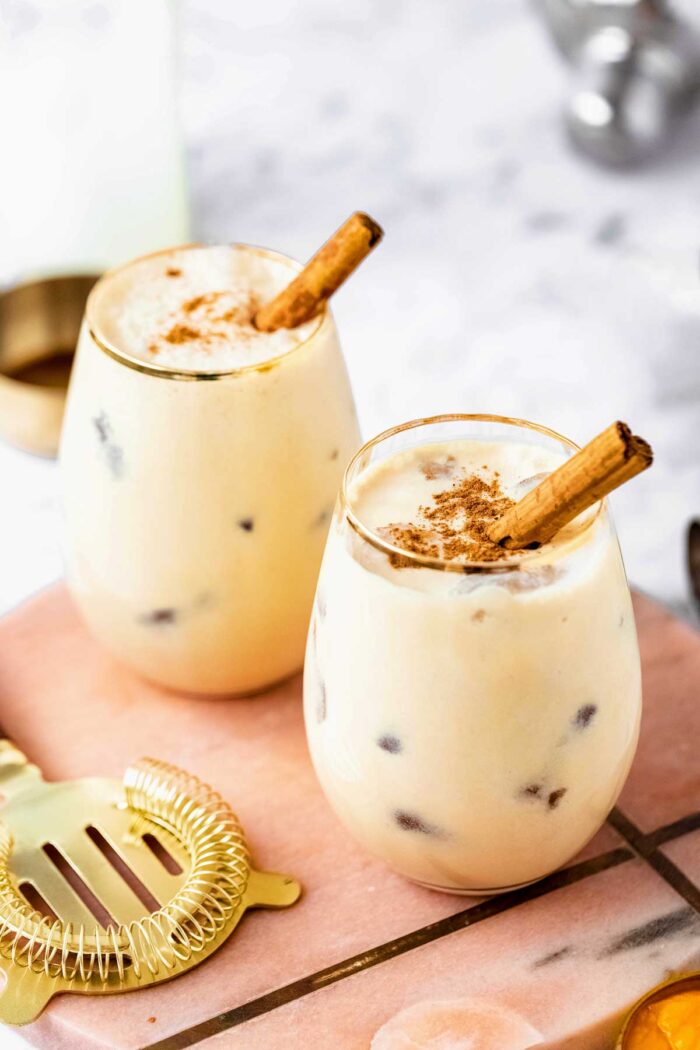 What is a white Russian?

Traditionally, a white Russian is a cocktail mixed with vodka, coffee liqueur, and cream that’s served over ice in an old-fashioned glass. When prepared, it can either be shaken in a cocktail shaker (as pictured here) or the cocktail ingredients can be poured in such a way that the cream and alcohol create visual layers.

As for the name, the “white” part has to do with the heavy cream, and the “Russian” part is merely because some of vodka’s origins are rooted in Russia. The cocktail itself was first created and served at the Hotel Metropole in Belgium during the 1940s.

When it comes to holiday treats, you’re going to be faced with two types of canned pumpkin in the baking aisle:

And while these types might seem interchangeable, there is a slight (yet significant) difference.

The key difference here is convenience. If you don’t have (or don’t want to buy) pumpkin pie spice, using pumpkin pie filling can save you some time and effort; you simply add it to the recipe and skip measuring the spices. However, it does limit your ability to control the taste, and if you’re using the pumpkin pie filling with other flavors, there’s no way to guarantee how they’ll interact.

This is why you’ll see many homemade recipes use pumpkin puree (which, again, is just the gourds, no added flavor) and season and spice the recipe by hand as needed. It is a tad more work but it also gives you more control over the flavor of your fall treats.

How long is a white Russian good for?

For best results, I recommend enjoying this drink when it’s freshly mixed. However, you can mix these drinks up to 8 hours in advance, storing them in the refrigerator until ready to serve. Just keep in mind that the drinks may separate over time and require a quick stir before being served. TIP: You can avoid this by waiting to pour in the heavy cream until just before serving.

Notes & this for this pumpkin spice white Russian

How to make a pumpkin spice white Russian

Step 1 – In two short cocktail glasses, add some ice, filling them up about halfway.