Perfect for gifting or keeping as a sweet snack, these sugar coated pecans have a baked-on cinnamon sugar coating that only requires 4 ingredients to make. 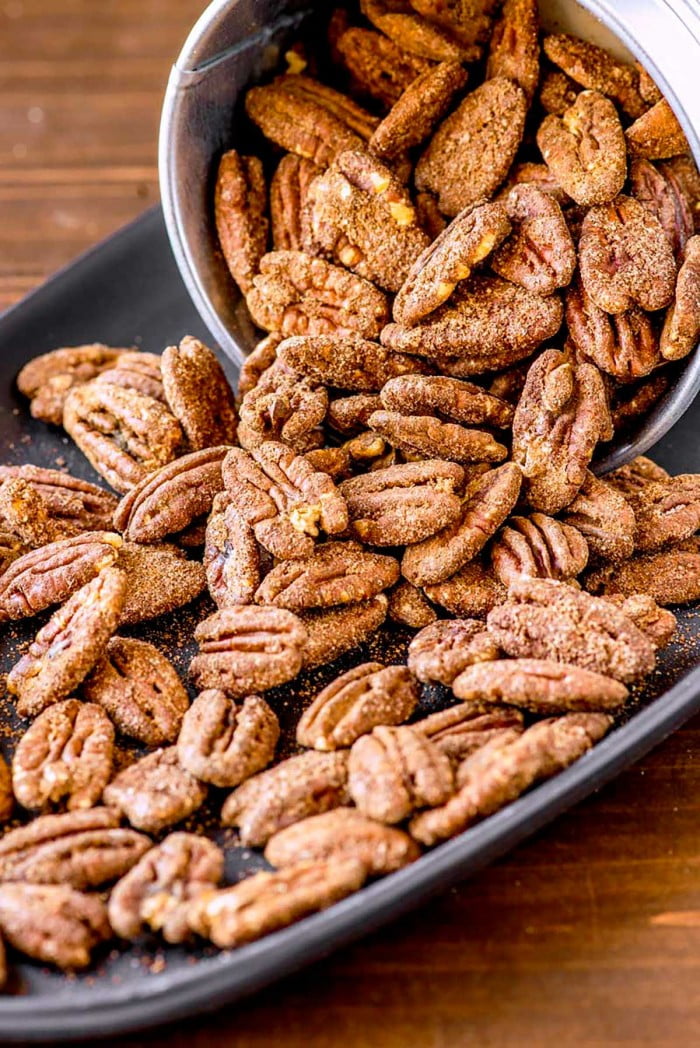 I’m always a fan of foods that can fit any occasion, and sugar coated pecans are definitely on that list.

Have a holiday, birthday, or event coming up and you want to gift something homemade? Then a fun snack food like these pecans would make an excellent, thoughtful present without a lot of hassle.

Or maybe you’re just in need of an easy snack and have some pecans left over from a baking project? Then a fresh batch of sugar coated pecans is a total win-win, for both curing a craving and cleaning out your pantry.

But no matter your reason, it’s hard not to whip up a batch of these pecans whenever you find yourself with all the ingredients on hand.

To make your own big batch of deliciously sugared pecans, you’ll need the following ingredients:

I’ve already mentioned that these pecans make great gifts – and they totally do – partly because of how long they last once made.

When stored in an air-tight container, sugar coated pecans can last two to three weeks on the counter.

Can you freeze sugared pecans?

Once prepared and allowed to cool, these sweet peans can be stored in a sealed container bag or freezer bag in the freezer for up to two months.

How do you make sugar coated pecans?

Step 1 – In a large bowl, add the egg whites and use a whisk (or hand mixer) to whip the egg whites until frothy. This part can be a bit challenging, since you’ve only got a little bit of egg white in a large bowl, but don’t stress about it too much. Just whip as best as you can. As long as you see a healthy amount of bubbles and the egg white has doubled in size, then you’re good to go.

Step 2 – Add the pecans to the bowl and use a spatula to gently toss and coat.

Step 3 – Sprinkle the pecans with sugar and cinnamon, then toss again until all the pecans are coated in sweetness.

Step 4 – Pour the pecans on a large baking sheet and spread out into an even layer.

Step 5 – Transfer to the baking sheet to the oven and bake until pecans are lightly browned. 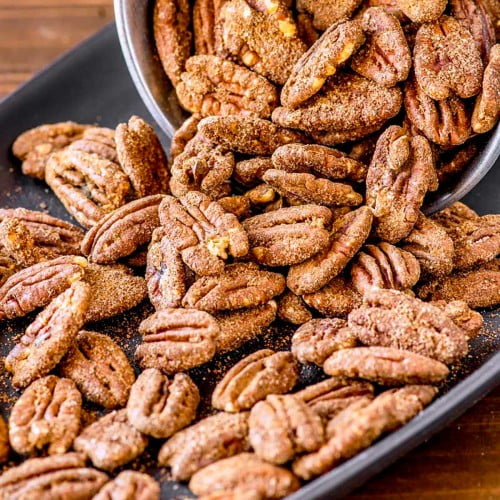 15 mins prep + 30 mins cook
265 kcal
Yields: 6 servings
Perfect for gifting or keeping as a sweet snack, these sugar coated pecans have a baked-on cinnamon sugar coating that only requires 4 ingredients to make.