These easy witch cauldron brownies are made with cauldron-shaped brownies that are topped with buttercream frosting, sprinkles, candy eyes, and candy bones. 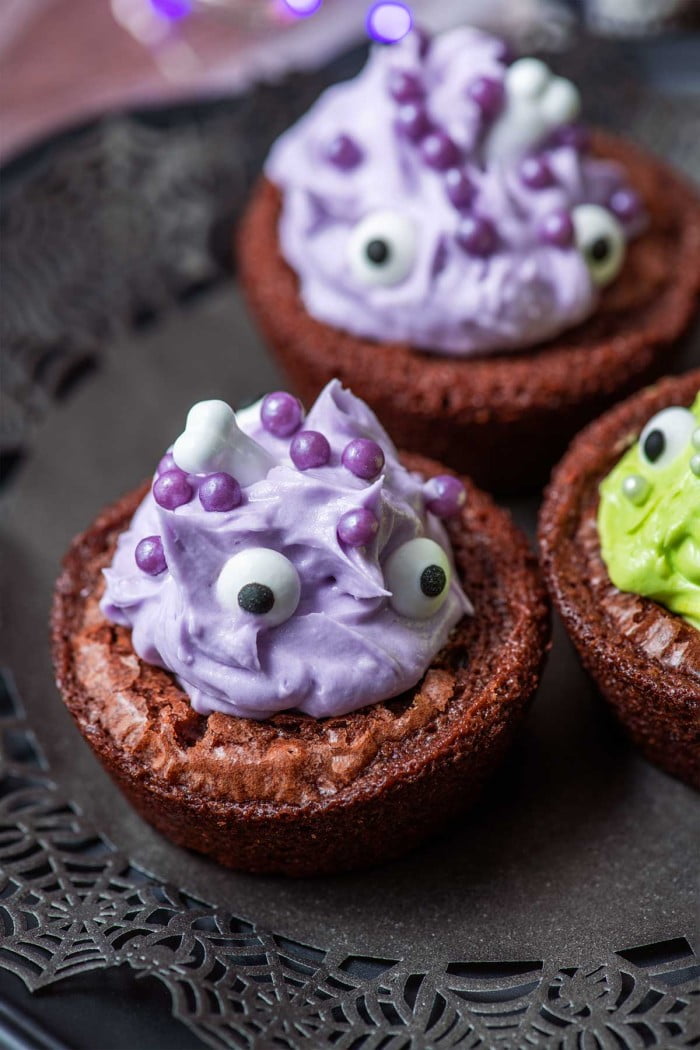 Plus, they’re so easy to decorate – just a few sprinkles, a candy eye or two, and a candy bone for stirring – that bakers of all skill levels can whip up a perfect batch of these spooky cauldrons.

How should you decorate these cauldrons?

To make these delicious cauldrons adorably creepy, you only need a few decorations on top of the buttercream frosting:

What other ingreidents will you need?

To make things easy, this recipe includes using a box of fudge brownie mix (or whipping up a batch of your favorite homemade brownies.)

No matter which method you choose, both types of brownies will require additional ingredients to make, and because this can vary depending on the brand you buy or the recipe you use, any extras you may need are not included in the recipe below. I know this isn’t ideal, but it’s done to lessen confusion and guesswork on what the many cooks out there might use.

So before you begin making this trifle, check the back of the box(es) you buy to ensure you have the additional ingredients on hand. This will typically include baking staples such as:

Can you make these brownie cauldrons in advance?

For best results, I would recommend making them no more than 24 hours in advance. Once prepared, witch brownie cauldrons can be stored either in a sealed container on the counter or in the refrigerator. If they are stored in the refrigerator, plan on allowing the frosting time to soften again at room temperature before serving (typically one hour).

How long will brownie cauldrons last?

Can you freeze witch cauldron brownies?

Yes, you totally can! However, it’s best to freeze the brownie cauldrons before they have been decorated. If you’ve already decorated them, I highly recommend enjoying them while they’re still freshly made.

Notes and tips for these witch cauldrons

How to make witch cauldron brownies

Step 1 – In a large bowl, mix the fudge brownie batter per the instructions on the box.

Step 2 – Generously spray a muffin tin with baking spray – seriously, don’t be shy here – you don’t want the brownies to stick to the tin, so coat them very well – then scoop about 1/4 cup brownie batter into each cavity.

Step 4 – While the brownies are still warm, use a one tablespoon measuring spoon to press a small well into the center of each brownie. Once this is done, transfer the muffin tin to a wire cooling rack and let the brownies cool completely while still in the pan.

Step 5 – While brownies cool, prepare the frosting by whipping together the butter, vanilla, and powdered sugar until nice and creamy. Add your chosen food coloring and mix until the desired color is reached. I used two different colors, but feel free to use as many (or as little) as you’d like.

Step 6 – Decorate the brownie cauldrons by adding a dab of buttercream frosting into the well of each brownie. Top the frosting with sprinkles, candy eyes, and candy bones. 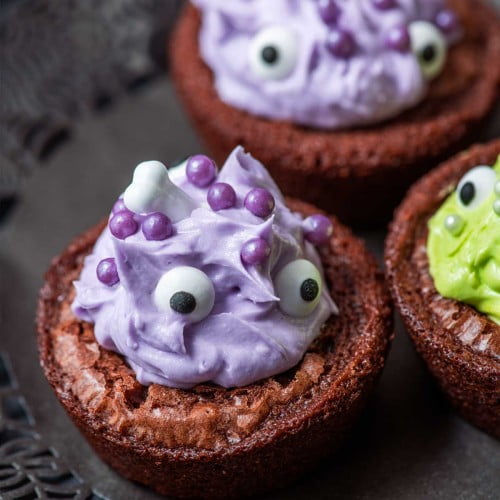